skip to main | skip to sidebar

One day I had left over couscous and did a search to see what you can do to use this up.
What I found was a great recipe for using the couscous instead of a crust for quiche.
I used the leftovers, which was pretty good. But since then I have made the couscous fresh, added in some butter or oil and what ever else you like and made the quiche right on top of the couscous just like you would any favorite recipe.
It is really good. You really don't miss the crust and it cuts the calories a bit from a regular crust.
Quiche to me is what you have on hand.
Mushrooms and onions- sounds good.
Crab and roasted red pepper- sounds good
Spinach, mushrooms and onions even better.
Any combination with good cheese and good eggs will make a great quiche.
Even better the next day so make two!
Posted by cookingwithgas at 1:41 PM 3 comments:

Did someone say pie?

I have never been a pie eater much less a pie baker.
BUT- lately- since Thanksgiving I have baked a few pies.
If you have been here before you might have found the recipe for Katie's Sour cream Apple Pie. A real winner-
1 Cup Sour Cream
1 well beaten egg
1 tsp. vanilla
1/8 tsp. salt
beat egg, add sour cream , vanilla and salt and mix well.
Add:
2Tbs. flour
3/4 cup sugar
mix well and add
2 1/2 cups apples sliced thin- coating the apples well-
Pour into pie crust
Bake 450 degrees for 15 minutes
while baking make a topping of:1/3 cup sugar1/3 cup flour1/4 cup butter1tsp. cinnamon
Bake 325 degrees for 30 minutes
take out of oven and put topping on and place foil over crust ends to keep from burning.
Bake another 20 minutes.
Cool- and eat about 4-6 hours after-good at room temp.
Yummy!

Then I made the following Apple pie with an old fashion apples stolen from my friend and neighbor Carol.
The apples are good old fashion cooking apples and make a really good pie-
So here is the recipe given to my by my sister.
I would like to call it Stolen Apples- pie but it is really called:
V.P.I. Apple Pie
(V.P.I. Home Economic Dept conducted research 1959 - 1960 to find best apple pie- this recipe won.)
5 C fresh apples, sliced thin (recipe calls for York, but I use any tart apple)
2 T flour
1/2 c. white sugar
1/4 c. light brown sugar
1/4 t salt
1/8 t nutmeg (I substitute cinnamon for nutmeg...I prefer the flavor of cinnamon)
1/8 t grated lemon rind
2 T margarine (I use butter)
1 (9") double pie crust
Mix all ingredients except butter and heap into lower crust.
Dot with butter and seal with top crust.
Slit crust in several places.
Bake 450 degree oven for 10 minutes
and then reduce temperature to 350 degrees and cook for another 55 minutes.

It was a hit- Gone to nothing but crumbs in about 10 minutes- I should have made two!
Posted by cookingwithgas at 3:48 PM 2 comments:

Put this all together and let cool until served
We also like this dressing on Cole slaw...
Posted by cookingwithgas at 2:45 AM No comments: 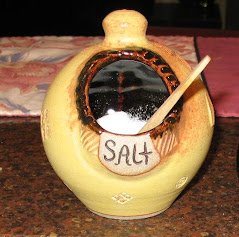 I have found that sometimes you need to use something you don't have or tweak a recipe in someway-this is my spot for sharing that with you:

Don't have whole milk in the house anymore- use about 1-2 Tbs. sour cream or yougurt to your low-fat milk and add to breads, muffins or biscuits.

Out of butter? I made a great Apple Crisp using olive oil.

When you have fresh herbs and no time to use them all freeze them in plastic snack size bags- take out frozen and use right away.

Thai food- Take fresh cilantro, garlic, chilies, fish sauce and lime- pulse all together and freeze in an ice cube tray ( cover tightly with foil)- pop out and put in baggie to use later- just toss in stir fried veggies, shrimp or chicken.

Are you having a crowd over and need to keep the mashed potatos warm? Cook them up-mash and put them in a crock pot on low heat.
Warm mashed potatos- yum, with garlic of course .

cookingwithgas
In 1976 we moved to the family farm in Seagrove NC. We raised goats, pigs, rabbits, a cow and a sheep, dogs, cats a few hermit crabs and two kids. We have been making pots for over 30 years and everyday we learn something new. You could live two life times and never make all the pots in your head.